You are here: Home / Of Interest / Places of Interest / The Battle of Britain Heritage Walk

The RAF Ceremonial Events Office was heavily involved in the preparations for the unveiling of the Monument in 2005 and it was realised while these were in progress that the monument was in close proximity to other RAF and Battle related locations. Their closeness was such that it seemed feasible for them all to be visited on foot without any retracing of steps.

From this RAF Ceremonial have developed a Battle of Britain Heritage Walk, designed to be followed by an individual or group using a map and guide available through the internet and taking approximately 45 minutes. The sites, in suggested walking sequence, are:

The RAF Memorial on Victoria Embankment

The Battle of Britain Monument on Victoria Embankment

The statue of Winston Churchill in Parliament Square

The Battle of Britain Chapel and Memorial Window in Westminster Abbey

……………… though of course these locations can be mixed and matched as the walker(s) desire. The opening times of St Clement Danes and Westminster Abbey (and admission charges to the Abbey) need to be taken into account and these are detailed in the guide.

The guide is available in paper form at St Clement Danes. 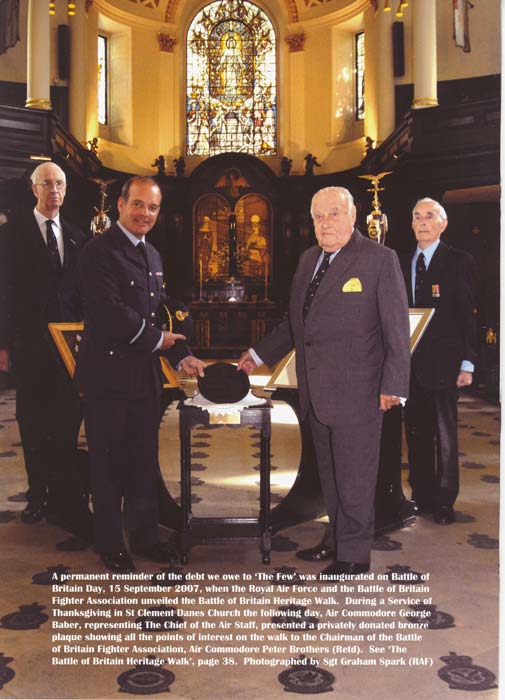