Twenty five Battle of Britain airmen were killed serving after the Battle in the Far East, three are buried in India, three in Burma and four in Sri Lanka (Ceylon in WW2). Of the remaining fifteen, one (P/O J Mansel-Lewis) is buried at Kranji War Cemetery in Singapore and the others, posted Missing, are commemorated on the memorial to those missing which stands in the cemetery grounds. They are:

Kranji War Cemetery is 22 kilometres north of the city of Singapore, on the north side of Singapore Island overlooking the Straits of Johore. It is located just to the West of the Singapore-Johore road (Bukit Timah Expressway) on Woodlands Road, just to the south of the crossroads with Turf Club Avenue and Kranji Road. There is a short approach road from the main road. 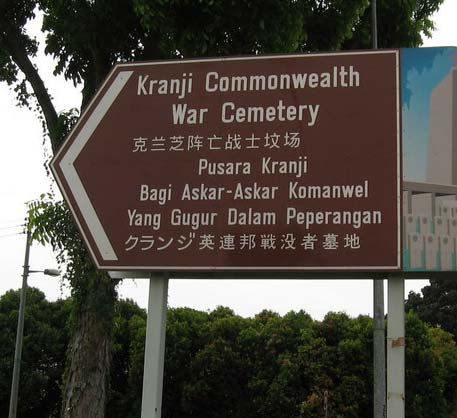 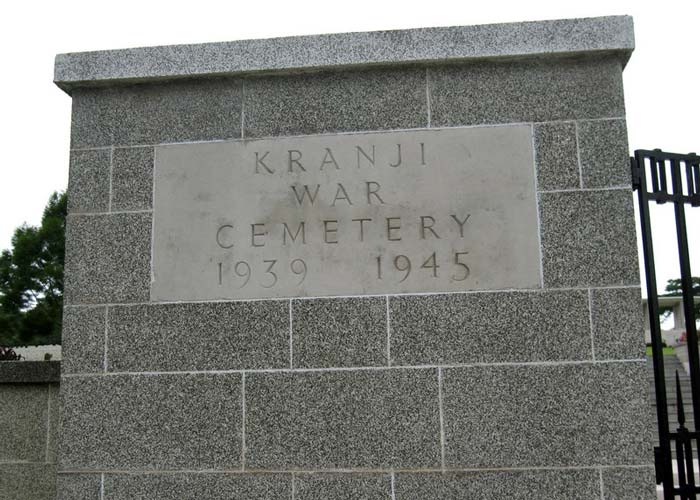 Before 1939, the Kranji area was a military camp and at the time of the Japanese invasion of Malaya it was the site of a large ammunition magazine. On 8th February 1942, the Japanese crossed the Johore Straits in strength, landing at the mouth of the Kranji River within two miles of the place where the war cemetery now stands. On the evening of 9th February, they launched an attack between the river and the causeway. During the next few days fierce fighting ensued, in many cases hand to hand, until their greatly superior numbers and air strength necessitated a withdrawal. 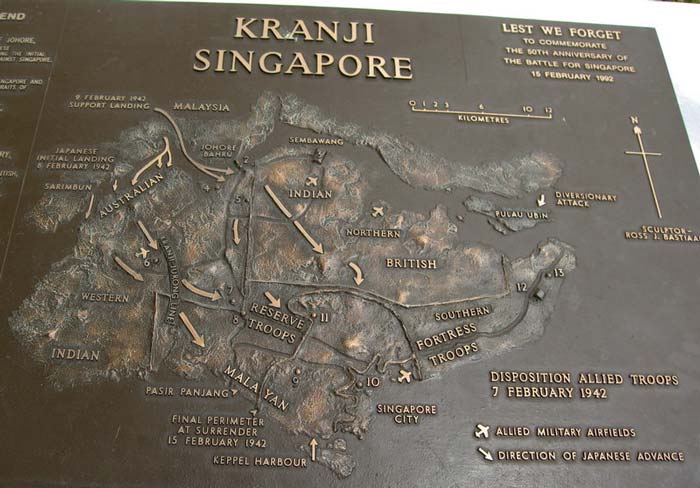 After the fall of the island, the Japanese established a prisoner of war camp at Kranji and eventually a hospital was organised nearby at Woodlands. After the reoccupation of Singapore, the small cemetery started by the prisoners at Kranji was developed into a permanent war cemetery by the Army Graves Service when it became evident that a larger cemetery at Changi could not remain undisturbed. Changi had been the site of the main prisoner of war camp in Singapore and a large hospital had been set up there by the Australian Infantry Force. 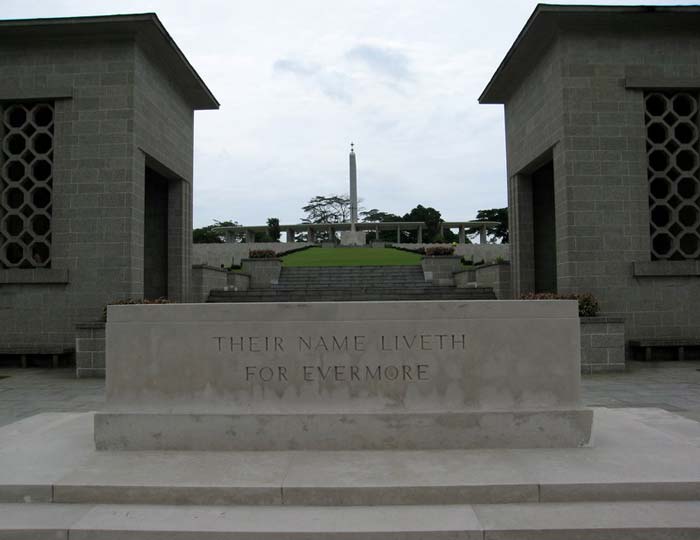 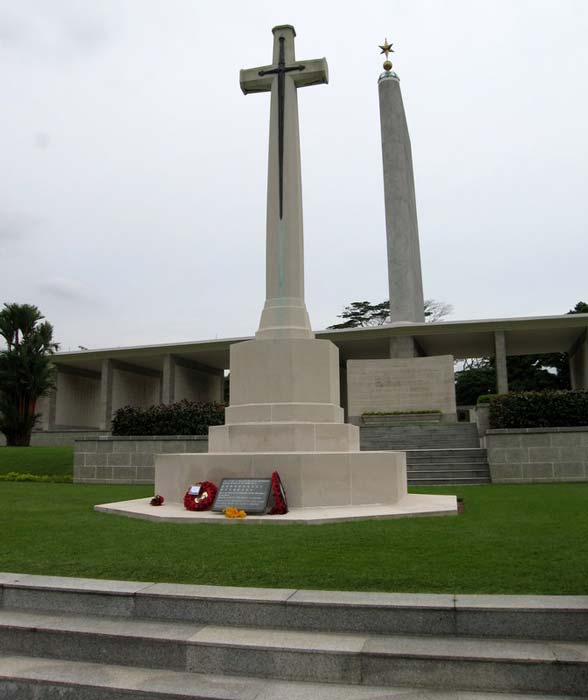 In 1946, the graves were moved from Changi to Kranji, as were those from the Buona Vista prisoner of war camp. Many other graves from all parts of the island were transferred to Kranji together with all Second World War graves from Saigon Military Cemetery in French Indo-China (now Vietnam), another site where permanent maintenance could not be assured. The Commission later brought in graves of both World Wars from Bidadari Christian Cemetery, Singapore, where again permanent maintenance was not possible. There are now 4,461 Commonwealth casualties of the Second World War buried or commemorated at KRANJI WAR CEMETERY. More than 850 of the burials are unidentified. The Chinese Memorial in Plot 44 marks a collective grave for 69 Chinese servicemen, all members of the Commonwealth forces, who were killed by the Japanese during the occupation in February 1942. First World War burials and commemorations number 64, including special memorials to three casualties known to have been buried in civil cemeteries in Saigon and Singapore, but whose graves could not be located. 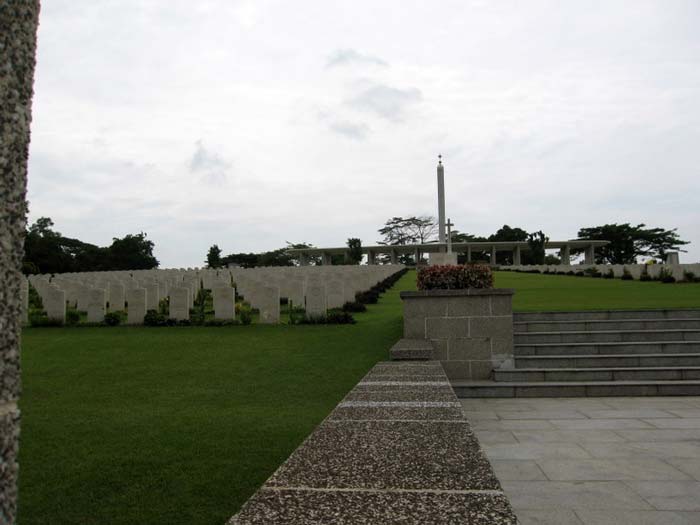 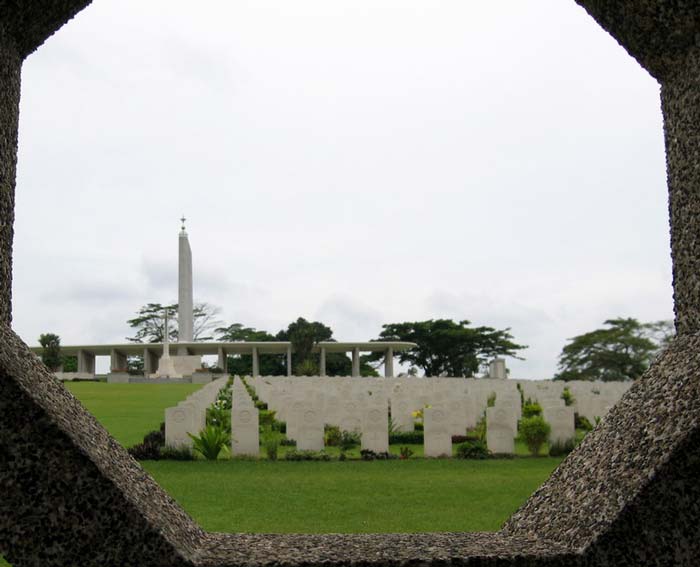 Within Kranji War Cemetery stands the SINGAPORE MEMORIAL, bearing the names of over 24,000 casualties of the Commonwealth land and air forces who have no known grave. Many of these have no known date of death and are accorded within our records the date or period from when they were known to be missing or captured. The land forces commemorated by the memorial died during the campaigns in Malaya and Indonesia or in subsequent captivity, many of them during the construction of the Burma-Thailand railway, or at sea while being transported into imprisonment elsewhere. The memorial also commemorates airmen who died during operations over the whole of southern and eastern Asia and the surrounding seas and oceans. 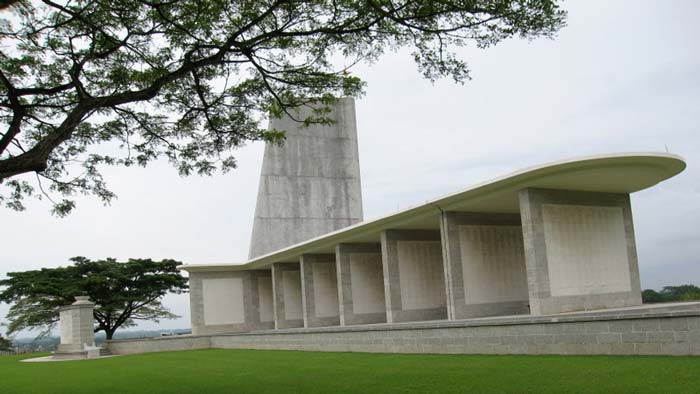 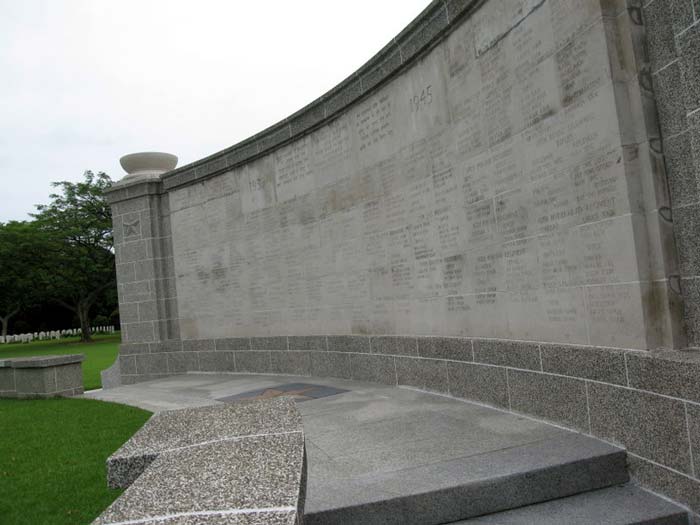 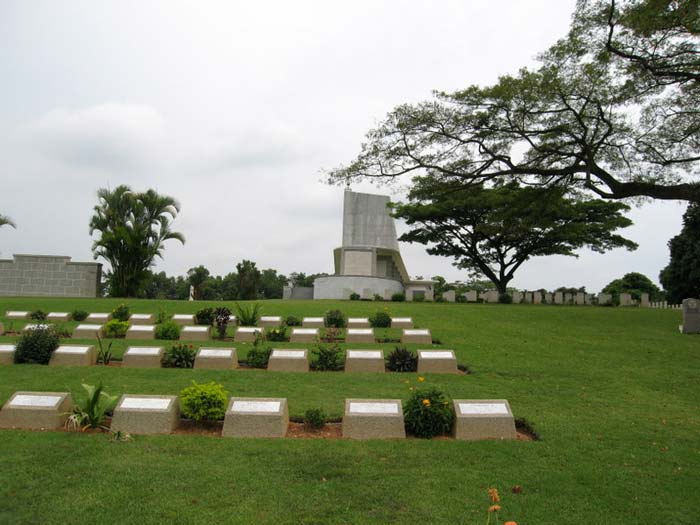 The SINGAPORE (UNMAINTAINABLE GRAVES) MEMORIAL, which stands at the western end of the Singapore Memorial, commemorates more than 250 casualties who died in campaigns in Singapore and Malaya, whose known graves in civil cemeteries could not be assured maintenance and on religious grounds could not be moved to a war cemetery.

The SINGAPORE CREMATION MEMORIAL, which stands immediately behind the Singapore Memorial, commemorates almost 800 casualties, mostly of the Indian forces, whose remains were cremated in accordance with their religious beliefs.

The SINGAPORE CIVIL HOSPITAL GRAVE MEMORIAL stands at the eastern end of the Singapore Memorial. During the last hours of the Battle of Singapore, wounded civilians and servicemen taken prisoner by the Japanese were brought to the hospital in their hundreds. The number of fatalities was such that burial in the normal manner was impossible. Before the war, an emergency water tank had been dug in the grounds of the hospital and this was used as a grave for more than 400 civilians and Commonwealth servicemen. After the war, it was decided that as individual identification of the dead would be impossible, the grave should be left undisturbed. The grave was suitably enclosed, consecrated by the Bishop of Singapore, and a cross in memory of all of those buried there was erected over it by the military authorities. The 107 Commonwealth casualties buried in the grave are commemorated on the Singapore Civil Hospital Grave Memorial.

Kranji War Cemetery and the Singapore Memorial were designed by Colin St Clair Oakes. Adjoining Kranji War Cemetery is KRANJI MILITARY CEMETERY, a substantial non-world war site of 1,422 burials, created in 1975 when it was found necessary to remove the graves of servicemen and their families from Pasir Panjang and Ulu Pandan cemeteries. Kranji holds 3712 identified casualties.