You are here: Home / Of Interest / Art and Literature / Spot the Dog

Spot and the Battle of Britain

The immensely popular Spot childrens’ books have been translated into 65 languages and published in over 100 countries. The appearance of the central character, a young dog called Spot, is linked to the Battle of Britain according to a letter written by Spot’s creator Eric Hill to the Daily Telegraph in September 2000:

SIR – Thank you for your wonderful coverage of the Battle of Britain which brought back many memories of growing up in London during the war.

Sixty years ago, on the afternoon of September 7th 1940, my 13th birthday, I returned from my part-time job as an errand boy for tea at our house in Holloway, north London. I stood in the back garden watching the aircraft weaving and turning above me with their vapour trails. What a spectacular birthday present! There was no sense of fear, only excitement.

That day proved to be a major event in my life. Seeing the air battle spurred me to start drawing, and this led me eventually to get a job as a messenger with an art studio. I received my first commission when the crew of an American Flying Fortress arrived to ask someone to produce a picture of them dropping bombs on a broken swastika with the legend “Bean’s Bad Boys”. It was to go on their flying jackets.

I later progressed to other subjects until, in 1980, I produced my first “Spot” book for children. Curiously, I realised some years later that Spot’s body and tail markings had been inspired by those on the RAF’s aircraft – a roundel on the body and tail tip. 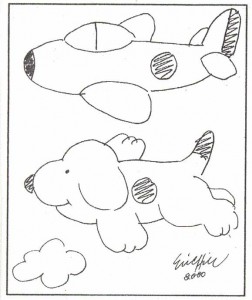