Description of monument scenes by the sculptor

Paul Day, the monument sculptor, describes each of the scenes in the main panels of the Battle of Britain London monument and the thoughts that inspired his work
Click on any of the images for an enlarged view

First Panel – Fighter Command – a – Pilots at rest
Waiting for the signal to be brought to readiness or to scramble allowed the pilots much needed time to rest. The backdrop of the Channel is a reminder as to where many pilots were to end up finding a place of permanent rest. WAAF’s crop up at different intervals, watching down over the pilots. I see them as guardian angels, willing their young men home to safety or to a pain free end.

b – The observers
Scattered around the coast and inland, the 30,000 strong Observer Corps ceaselessly scoured the air to intercept, visually and orally, enemy raiders. After RDF (Radio Direction Finder), they were the next line of defence and crucial for the relaying of information back to Uxbridge. 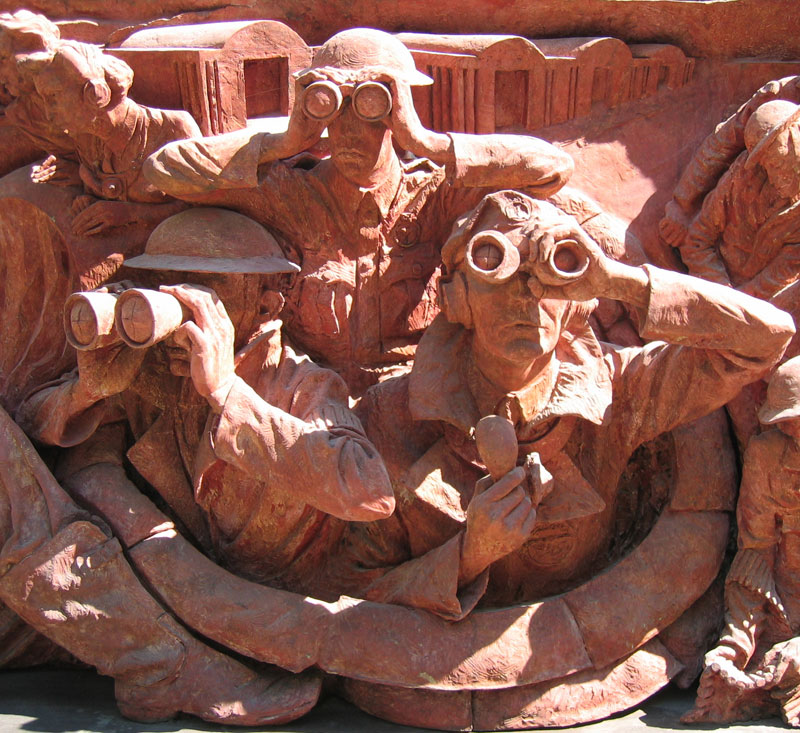 c – Mechanics and Riggers
None praise the work of the ground crews more highly than the pilots themselves, whose very lives depended on the vigilance and efficiency of their RAF colleagues. Their tasks were more repetitive, their heroism less glamorous than that of the pilots, but they shared amply in the danger and took as many risks. From bombing raids to machine gun sweeps by enemy fighters, the ground crews faced battle at the sharp end. Here the armourers wrestle with bullet belts whilst arming Hurricanes. 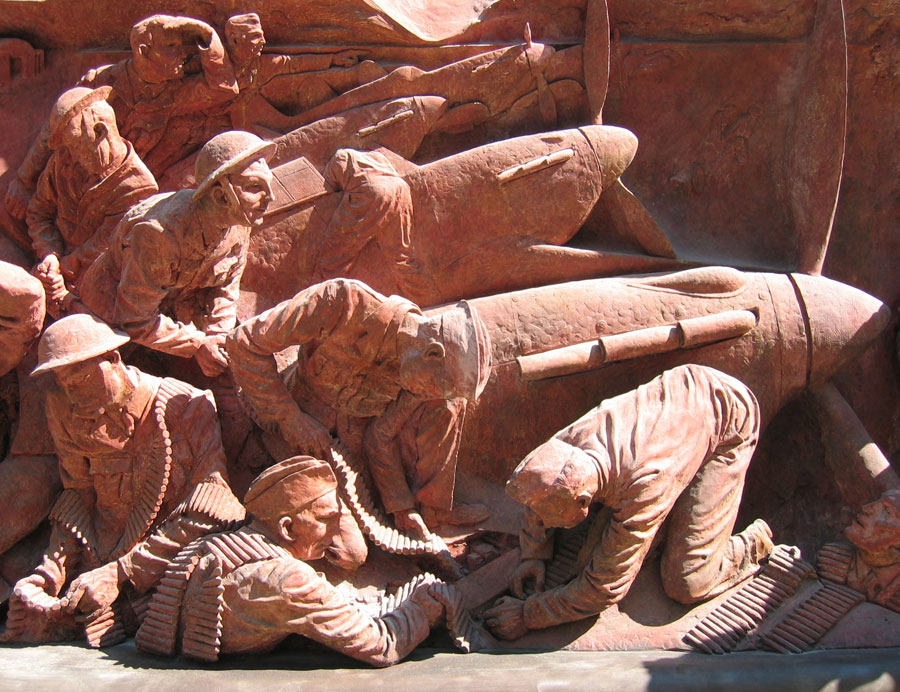 d – Scramble
That classic moment, when the signal to “Scramble” is given, had to take centre stage. It is the very symbol of the Battle. In this case, the pilots surge off the wall, out of their picture and onto the pavement, into our world, a reminder to say that these men really did exist and do those incredible things. 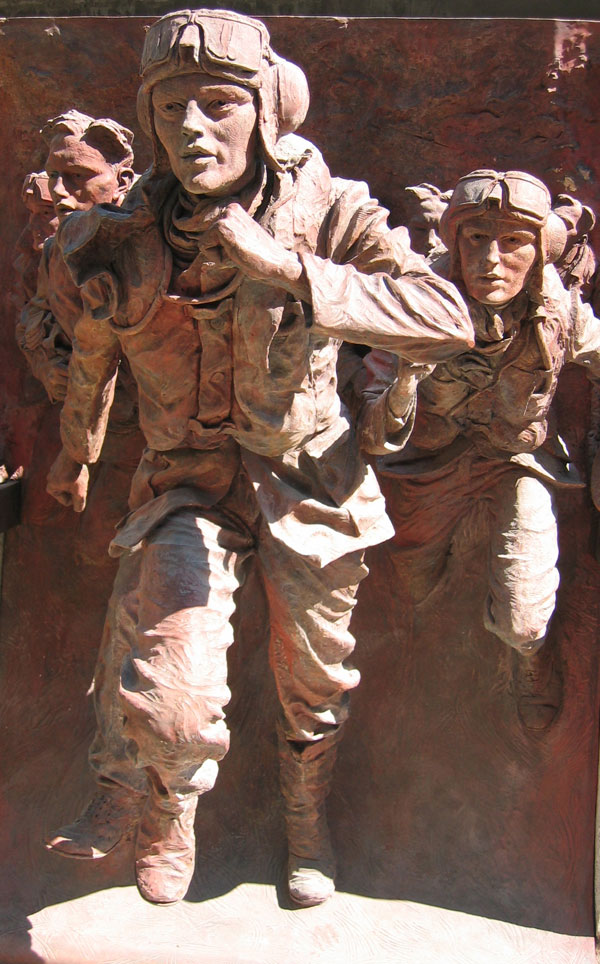 e – Large pilot’s head & plotters
Depicting an air battle in painting or sculpture is not easy to do. Aviation painting has adopted the point of view of a fixed lens attached to the wing of an observation aircraft maintained at a safe distance from the action to serve the needs of composition. The image is generally taken at a thousandth of a second and completely freezes the action. I adopted the view that air combat took place above all in the cockpit and in the eye of the combatant, that it was fast and somewhat blurred. 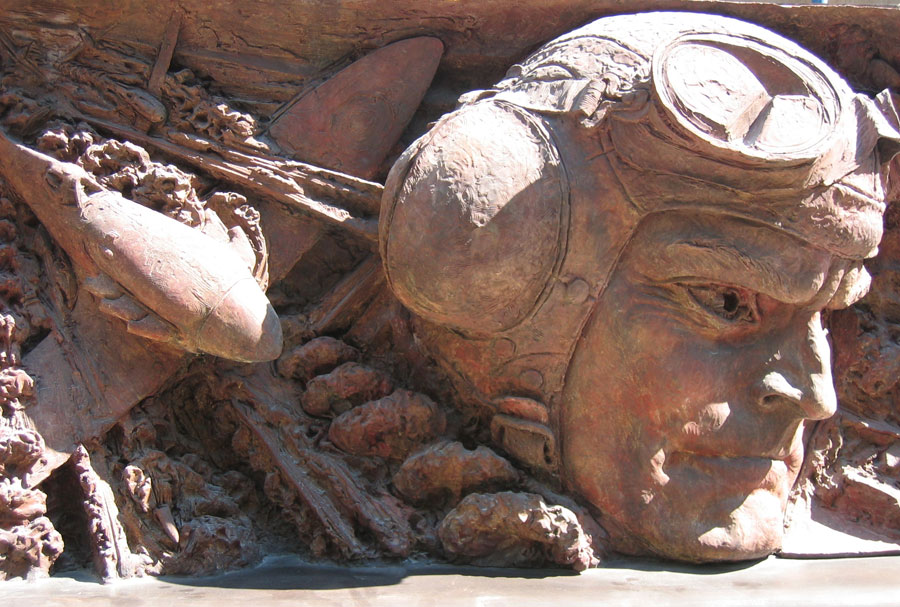 It is as much about the psychological intensity etched into the pilot’s brow as the superb ellipses described by a spitfire trying to avoid a pursuing Me109. In this case, with the huge pilot’s head, I wanted to put us in touch with the flesh and blood behind the machine, though in some way, the flesh and blood and the machine are one. A young face can look old when enduring excessive physical danger and intense concentration. This I hope is the case with this pilot who is surrounded by speed, smoke and tracer fire. He is not alone, however. His moves are being followed; his frantic speech passes directly from the air into the ears of the young girls at the plotting tables who will him on to victory and home to safety, who may even share his last moments of agony. 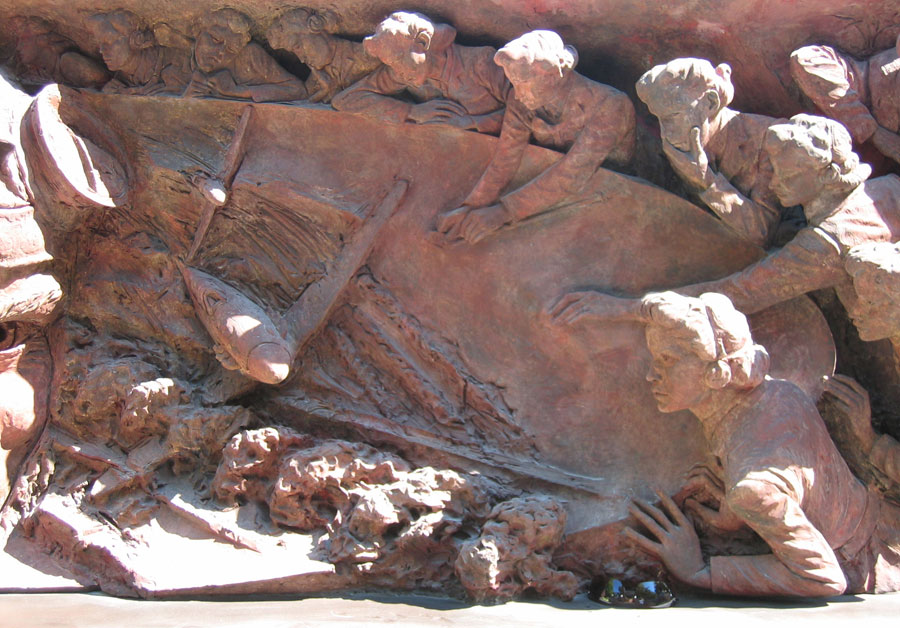 f – Tales from the Mess
Young, inexperienced pilots drank in the commentaries of their battle hardy counterparts. Knowledge gained this way was as necessary to their survival as the initial flying course. I imagine that it was camaraderie and a sense of the Squadron spirit that gave those young men the strength to face death and injury on a more or less permanent basis. Having read a great many pilot’s memoirs, I am still amazed at how easily death came through accident and inexperience: an uncaged artificial horizon or undercarriage raised during landings, navigational error and unchecked propeller pitch. 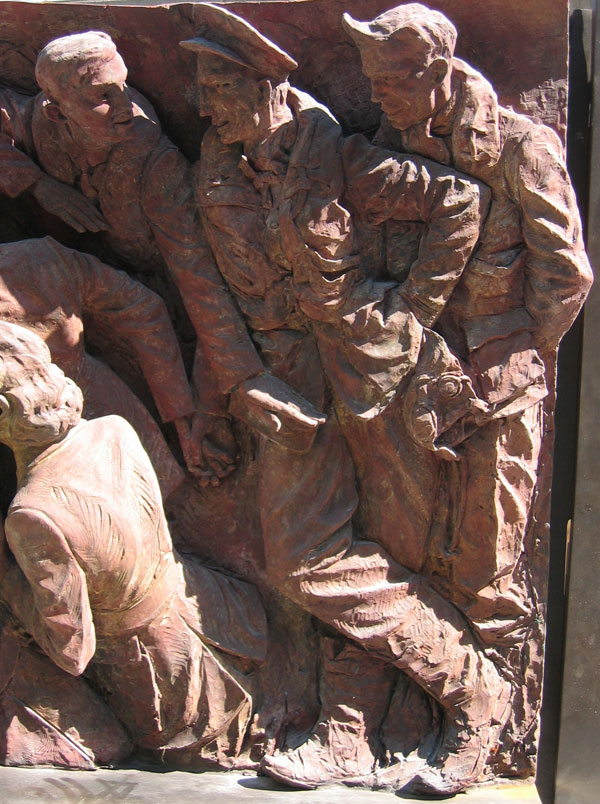 Second Panel – Britain at War – g – The slit trench
There are some superb archive photographs of Kentish hop pickers watching from the shelter of slit trenches the air battle raging overhead. The expression on many faces seems, at this early stage of the War at least, to be one of curiosity and fascination. The real nature of the threat had not yet become apparent. Images of London’s children sheltering in the same way reveal their amusement at seeing dots racing around the skies. Not exactly what I imagine when thinking of the frontline of a war and yet this was it in Britain in 1940. The contrast between civilian normality and a pilot’s life at angels twenty was very marked. 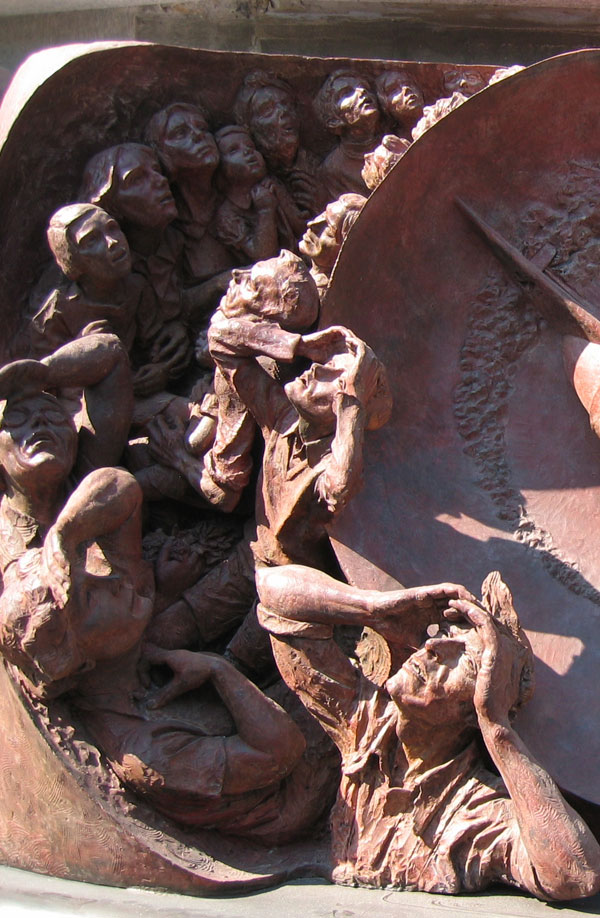 h – Gunners
The threat appears in the form of aerial bombardment. At first only the RAF installations were targeted. Delusions of a clean war remained intact, that is before civilian casualty statistics started to rocket. The gunners pass shells from one to the other before ultimately being discharged into the sky. Before researching the Monument I had no idea how anti aircraft shells worked, that the art was in choosing the correctly timed fuse as well as in careful aim. In the kiss blown between the gunner and a factory girl I want to remind us that this action did not take place in some sort of heroic bubble but in a world of human feeling and frailty. Time, in removing events and their witnesses from us, seems to filter out most of what is common in human experience, making it seem distant and unreal. Anecdotal humour can perhaps remedy slightly this distortion of time.

i – Woman power
Liberation for women: this War wrote a major chapter in the evolution of Society’s attitude to women in the work place .The woman worker’s role did not stop at the aircraft and munitions factory gates. Women ferry pilots also flew the aircraft from the factory to the airfield. This is not political correctness, just interesting, historical fact. 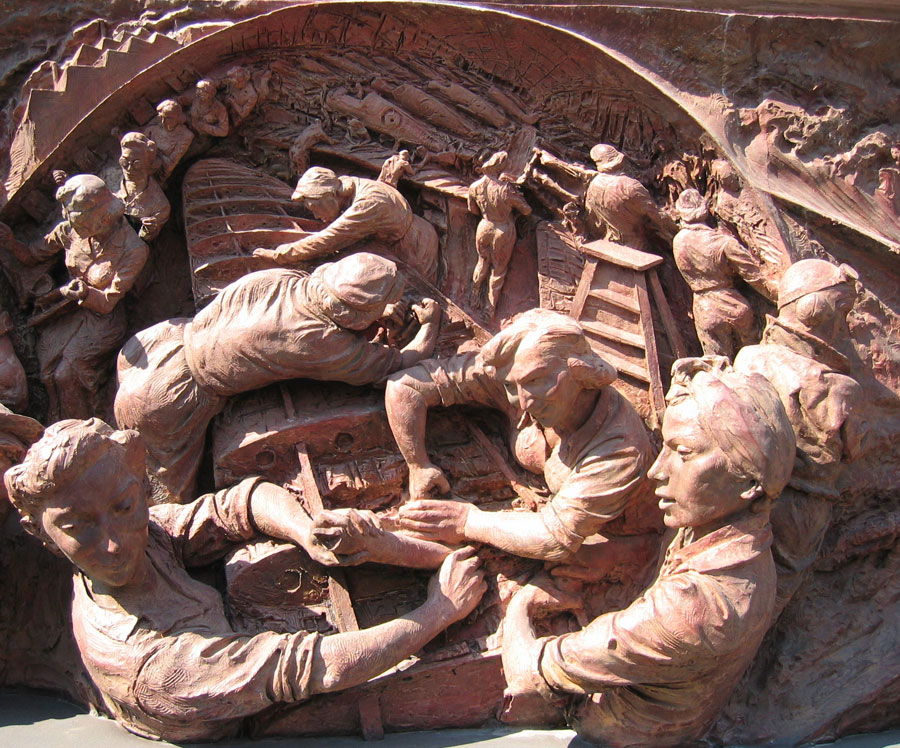 j – Dogfight
In my mind, pilots have to be at the centre of this Monument on both sides. Their lives are at its heart. As I wrote earlier, I have chosen to portray a pilot’s eye view of air combat and not that of the aviation painter. In any case, skies in relief sculpture are not the easiest of subjects to make work. I have put the head of a Messerschmitt pilot onto the shoulder of an RAF one to try and create the sense of a dual being fought out by two knights of the air, in close proximity and to the death. The “Hun in the Sun” has the advantage but as their aircraft fly past behind them, the Spitfire has managed to slip onto the tail of the Me109 and has caught it with tracer fire. The pilots on both sides had a healthy respect one for the other. Likewise, in this work, I am in admiration of all the young men who took part.

k – St Paul’s
St Paul’s became the symbol of resistance during the Blitz having remained standing while all around was demolished. The famous photo collage of the Cathedral inspired this sequence. Although, not part of the Battle of Britain as such, the Blitz was the direct result of Dowding’s successful strategy to save the RAF and keep fighters in the air at all costs. German attack passed from airfields and factories to almost any other legitimate and less legitimate target. 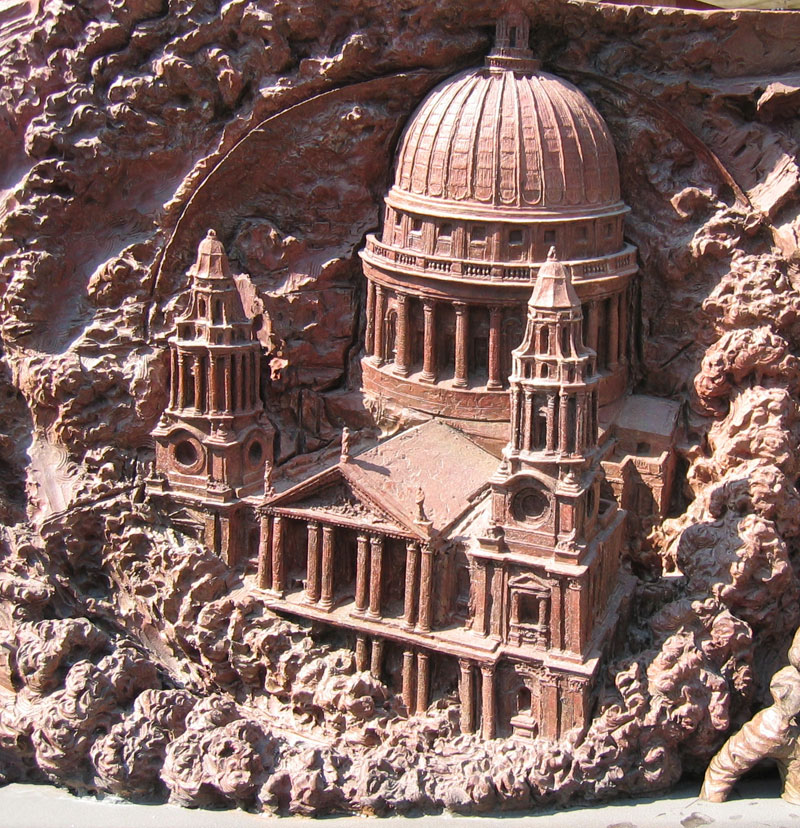 l – Searching the ruins
I think one of the most troubling aspects of the Battle was the bombing of heavily populated areas using inaccurate means and the subsequent horrors that befell certain cities. The suddenness of loss through bombardment is dramatically portrayed in Guy Weston’s film version, “The Battle of Britain” (1968). That people could wake up the morning after a bombardment and find their home blown away is terrifying. Of course some weren’t to wake up at all. This scene is in homage to the rescue services and a reminder that, although the British people were tried by fire, the Nation was never to be put through occupation and the trauma that entailed. In any case, had we lost this battle, the war in the West would have been definitively lost, and probably the War.

m – brew up
Making tea in an Anderson shelter is not an act of great heroism, more one of defiance. I like this as an image of the British spirit of 1940, like the home guard with broom handles and bicycles, the removal of signposts to confound the enemy, the collection of saucepans to make fighters, and so on and so on, a tin dug-out at the bottom of the suburban garden offering shelter to a whole family against 1000 pounders; derisory means on the face of it but cultivating that immensely powerful spirit of resistance so essential to the Nation’s survival. 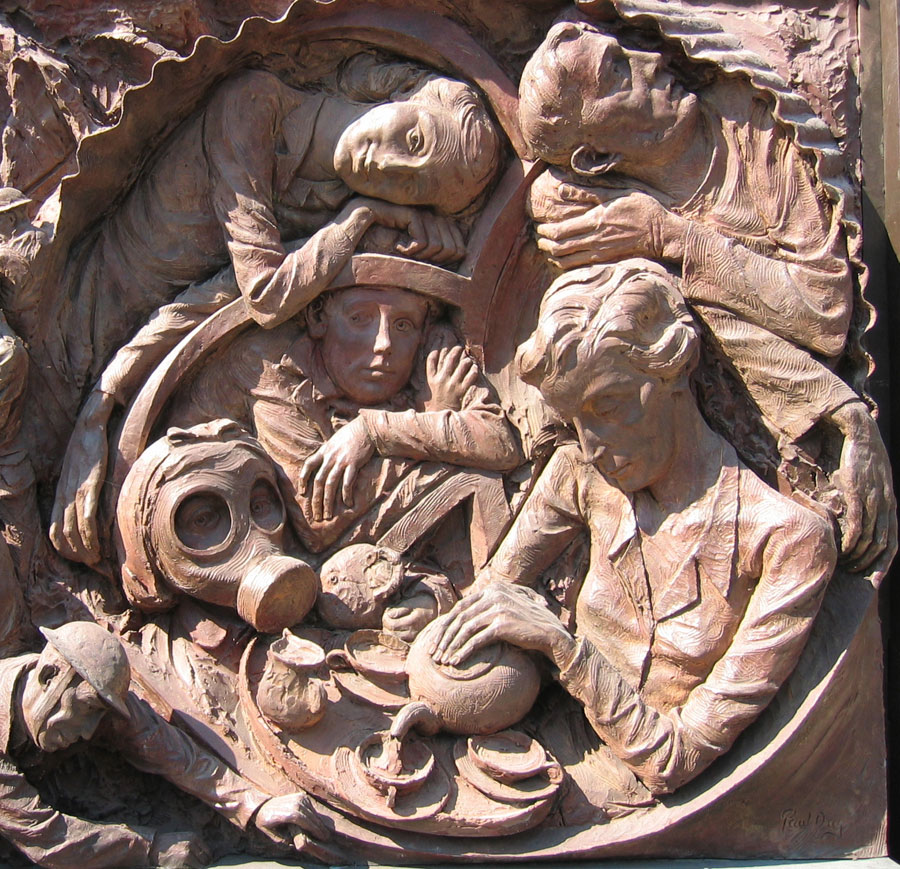